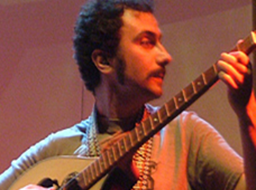 Santi Pulvirenti is an Italian composer who undertook studies of harmony and jazz improvisation. He has worked as songwriter and musician for some of the most famous Italian and international artists such as Patty Smith. Since the 2000s he began his career as a composer for feature films, composing for several famous Italian blockbusters.
“La Mafia uccide solo d’estate (The Mafia Kills only in Summer)” 2013 Italian comedy-drama film and directorial debut of the TV satirist Pif. The Italian Senate President Pietro Grasso referred to this film as the best film work on Sicilian Mafia ever made. It was awarded Best Comedy at the 27th European Film Awards and nominated for Best Original Score at the David di Donatello Awards.
“Orecchie (Ears)” by Alessandro Aronadio screened at the 73th Venice Film Festival where it won Youth Arca Cinema Award. It was also nominated for Best Comedy at the National Syndicate of Film Journalists Silver Ribbon Award.
“In guerra per amore (At War with Love)” second work of director Pierfrancesco Pif Diliberto. It received 7 nominations at the David di Donatello Awards and won the Youth David di Donatello Award.